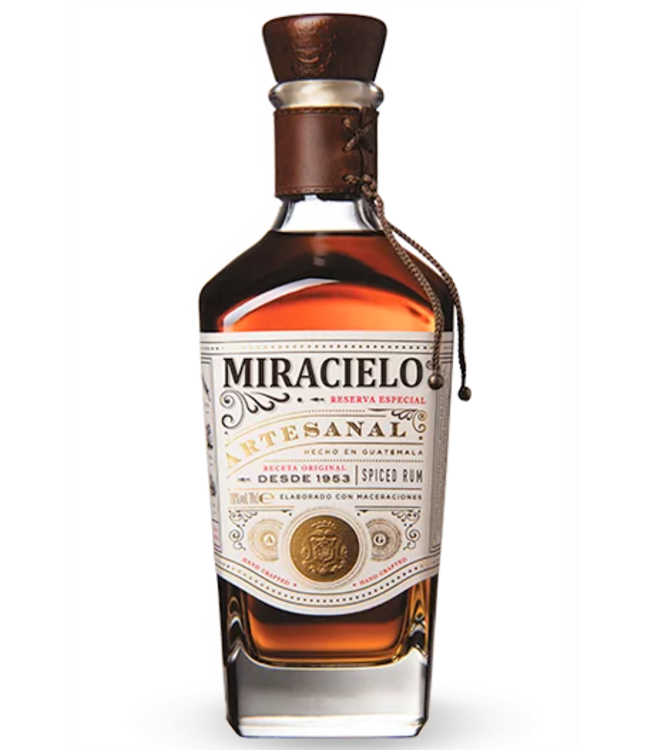 The Miracielo rum recipe has not changed since 1953. It is made by hand with maceration of fruit and spices, the combination of which evokes the flavours of La Antigua desserts. Read more..

The Miracielo rum recipe has not changed since 1953. It is made by hand with maceration of fruit and spices, the combination of which evokes the flavours of La Antigua desserts. An integral part of the production process is the maceration of vanilla, fresh plums and sultanas, which are added to the rum during the ageing process. They perfectly represent colonial cuisine, combining old Spanish techniques with ingredients from the New World. Thanks to them, the resulting product has its unmistakable taste and aroma. It is very fine and slightly spicy. The emphasis on the artisanal production of Miracielo rum is reinforced by the production and design of a luxury bottle in small series, the neck of which is fitted with a handmade leather strap.

Made according to an old family recipe in the ancient city of Santiago de Los Caballeros, nicknamed La Antigua Guatemala. La Antigua Guatemala was the first capital of Central America, founded during the Spanish colonisation in 1541. This former capital has beautiful architecture of the local churches and monasteries. Years after its foundation, an earthquake hit the city, causing the ceilings of several monasteries to collapse. They have not been repaired and these imaginary "windows to heaven" amaze visitors. And that was what inspired the name of the rum Miracielo (Mira, cielo !!! = Look, sky! sky! "), a brand closely linked to the history and traditions of" La Antigua Guatemala ". When the producers of the Guatemalan distillery merged, the Miracielo rum recipe was kept secret.

The Miracielo rum recipe has not changed since 1953. It is made by hand with maceration of fruit and..