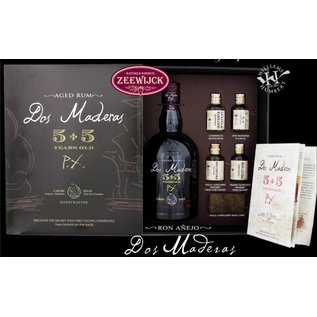 After ageing for five years in the Caribbean and for a further three in the facilities of Bodegas Williams & Humbert in the wood of Dos Cortados (palo cortado),

at this point “Dos Maderas 5+3” then enters a third and final stage of ageing in casks which have previously been used to mature Don Guido sherry (Pedro Ximénez) for over 20 years, to become the extraordinary Dos Maderas P.X. Both Don Guido and Dos Cortados have been aged for 20 years as certified by the oldest Denomination of Origin in Spain: Jerez-Xérès-Sherry.
The final stage of ageing in Pedro Ximénez casks bestows a dark amber colour with delicate notes of raisin, fig and vanilla.