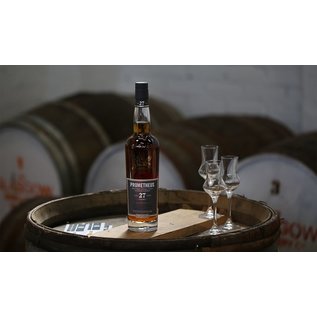 The Glasgow Distillery Company have announced the second release of it´s award winning Prometheus Series with an ambitious launch across 3 Continents in 3 weeks during February and March 2016.

Prometheus 27 Year Old will make its debut with exclusive distribution partner A Wee Taste of Scotland at the Munich Whisky Festival on the 19th – 21st of February then move to Hong Kong for the Malt Masters Festival on the 27th & 28th February debutins with Platinum Wines in a VIP tasting before traveling to Las Vegas to attend Mahesh Patel´s Universal Whisky Experience one of the world´s premier whisky events.
Glasgow Distillery Company´s Commercial Director David Brown said: „Following on from the success of Prometheus 26 Year Old we have had strong demand to release the 27 Year Old.

With it´s bold new packaging this wonderfully aged Speyside single malt whisky is something we are very proud of. To launch on 3 continents in 3 weeks is ambitious for a relatively small distillery, but we felt it was the perfect way to reflect the confidence we have in our brands.“
Prometheus 27 Year Old is a very rare single malt from Speyside, although the exact distillery of origin remains a secret.
This 27 Year Old whisky shares similar roots to it´s younger sibling, but has its own distinct charcter. Rich, round, soft and fruity with a hint of lightly charred oak on the Nase, delivering a powerful, savoury, spicy taste with a long, slightly smoky finish. Industry experts who have been amongst the few to have tasted the spirit commented on the wonderful aromas and especially the warm smokiness, which is often more subdued in aged whiskies.

The bottle is beautifully packaged in a bespoke presentation box, reflecting the precious whisky inside.
„At The Glasgow Distillery Company, we pride ourselves on bringing to our customers only the finest quality spirits and in our opinion, Prometheus 27 Year Old delivers this in full“, concluded Mr Hughes, Glasgow Distillery Co-Founder.